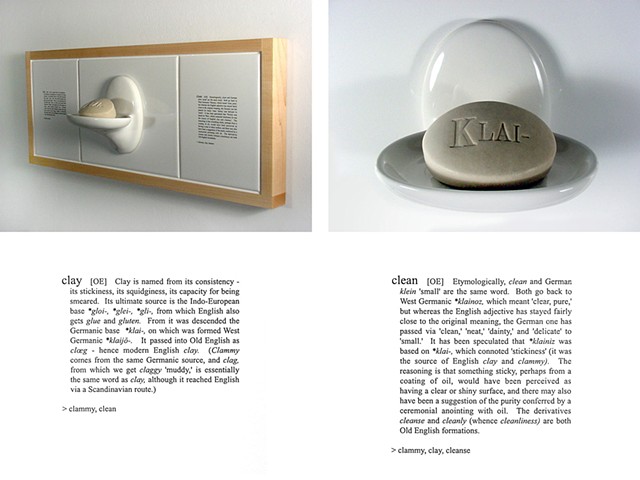 clay [OE] Clay is named from its consistency - its stickiness, its squidginess, its capacity for being smeared. Its ultimate source is the Indo-European base *gloi-, *glei-, *gle-, from which English also gets glue and gluten. From it was descended the Germanic base *klai-, on which was formed West Germanic *klaijo-. This passed into Old English as cloeg - hence modern English clay. (Clammy comes from the same Germanic source, and clag, from which we get claggy 'muddy,' is essentially the same word as clay, although it reached English via a Scandinavian route.) >clammy, clean.

clean [OE] etymologically, clean and German Klein 'small' are the same word. Both go back to West Germanic *klainoz, which meant 'clear, pure,' but whereas the English adjective has stayed fairly close to the original meaning, the German one has passed via 'clean,' 'neat,' 'dainty,' and 'delicate' to 'small.' It has been speculated that *klainiz was based on *klai- which connoted 'stickiness' (it was the source of English clay and clammy). The reasoning is that something sticky, perhaps form a coating of oil, would have been perceived as having a clear or shiny surface, and there may also have been a suggestion of the purity conferred by a ceremonial anointing with oil. The derivatives cleanse and cleanly (whence cleanliness) are both Old English formations. >clammy, clay, cleanse.